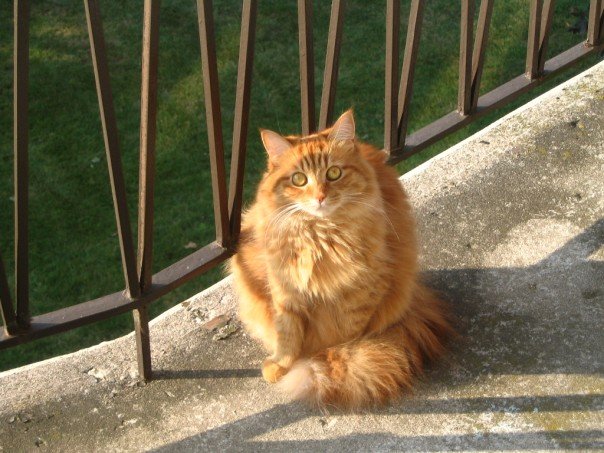 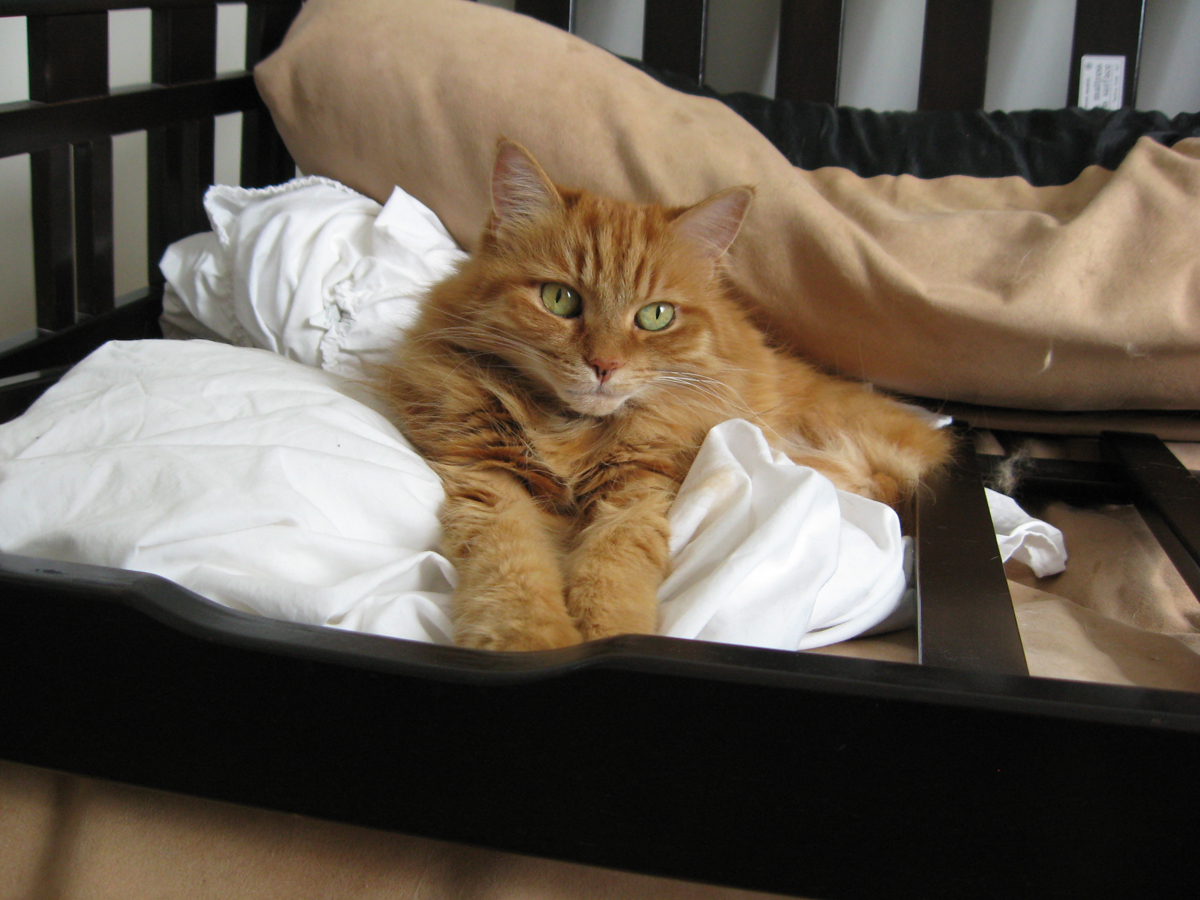 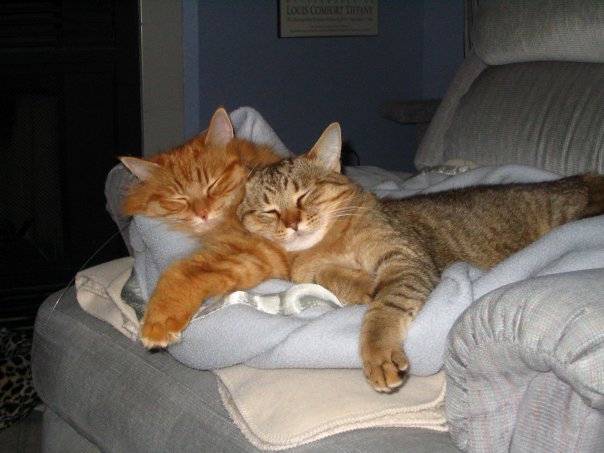 Frankie was the very first pet that I brought into my home as an adult.  I had never cared for another living creature before, aside from myself, and my family had been made up only of dog lovers until that point; life with a cat was a new experience for me.  I felt excited, nervous and a little scared to be caring for a creature so small, who would need me so much, but I loved Frankie from the moment I laid eyes on her – a stunningly beautiful little orange ball of fuzz, swatting at me with tiny paws as I picked her up and cooed words of adoration into her wee face.  Those tiny swats were a harbinger of things to come – Frankie was, in a word, feisty.  At the age of seven weeks, she came into my home and made it her own – she made it clear to me, in the way that cats do, that I belonged to her, not the other way around.

From the very first, this small kitten was a tiny spitfire who knew no fear.  She explored every inch of our home, and even tried to investigate the inside of the heating ducts during one frightfully close call with a floor register that had carelessly been left open.  If an unexpected noise echoed through our house, she would puff up all of her orangey stripes as big as she could make them, narrow her eyes, and let out a hiss as mighty and ferocious as any lion’s roar.  Creatures like mice and those awful insects with a million legs that would skitter thoughtlessly across Frankie’s path soon learned the error of their ways; once, I heard her swatting at something in the kitchen, and a few moments later she leapt up onto my lap, a leg from one of those creepy bugs still dangling from her mouth.  She looked so very triumphant, so proud of her accomplishment.  She had defended our small castle once again.

Frankie stayed with me through several moves across southwestern Ontario, through school, career changes, more school, more moving, and the addition of more animals to our little family.  When I brought a kitten home just before Frankie’s fifth birthday, the new arrival was intended to be a friend to her – I worried that she was lonely when I was out at work or at school.  My girl did not take kindly to this small brown interloper, and made her feelings clear to me by screaming at him, and me, whenever he dared to enter a room she was in.  My dear little lady had a dreadful temper – the truth is, she never really cared for anyone aside from me, and she made her displeasure with all others known with growls, swats, and pointed hisses.  With me, Frankie was sweet and snuggly and purring.  With others.. well, mostly people were afraid of her, and not without reason.  I tried to socialize her to other people and animals but in the end, I learned to respect Frankie for who she was – a one-person cat, with no interest in making more friends.  She did eventually accept her little brother (and he adored her), and on rare occasions could even be found snuggled up next to him, enjoying a cozy nap and a rare moment of sibling harmony.  Frankie mostly ignored the dog I adopted a few years later, behaving as if it was beneath her to even acknowledge the presence of a dog, let alone form a relationship with one.

I learned so much from Frankie, but maybe most of all, I learned to be true to myself, to respect who I am and not try to change it.  That’s what she did – Frankie never pretended to be anything she was not, and she would soon educate anyone who attempted to change her ways, to reform her into a “good cat”.  My godson, a toddler at the time, mixed up her name and referred to her as “Cranky”.  That name stuck for quite some time, it was so perfect – as she grew older, Frankie began to turn into even more of a grump.  But she was still my best friend, a vivid streak of living fire who would run to greet me at the door every time I came home, and who would always leap onto the bed beside me seconds after I turned out the light, settling into the crook of my arm, purring wildly.  Frankie was hilarious, too; she had a great sense of humour and a gutsy attitude that came out in the most unexpected ways.  If I was crying for any reason, it never failed that she would leap into my arms, purring and offering comfort… until, that is, she felt that I should be ready to smarten up and move along with my day, at which point she would bite my cheek, as if to say “Hey you – snap out of it!  Whatever this is, it’s going to be fine”.  This always made me laugh, at which point Frankie would jump to the floor and wander away, her job done.

When Frankie was 8 years old, I took her in to work with me for a physical exam, and to run some blood work.  This was just a routine senior wellness panel; I was not expecting to find anything wrong.  Frankie seemed healthy to me and there had been no changes in her habits that I could see.  The exam was fine, and the bloodwork came back normal, except for one small thing.  The level of calcium in her blood was very slightly high; this is sometimes a warning sign for different kinds of cancer.  I told myself not to worry, the elevation was so minor, it could have been attributed to many other things – it could be nothing at all.  Frankie’s veterinarian suggested that we take a wait-and-see approach, re-checking in six months to see if there had been any changes.  Five months later, Frankie developed an eye infection, the first illness she’d ever had since I adopted her.  Her physical exam was otherwise normal, but when I popped Frankie onto the scale to check her weight, I was alarmed to find that she’d lost several pounds since the last time she’d been in. The weight loss was so gradual, I hadn’t seen that it was happening – a common occurrence with cats, for whom the loss of even a pound can be significant.  I ran every test on her that made sense, looking for the source of the problem, and aside from the eye infection, the only physical problem we could find was a very minor infection of a parasite in her stool. Hoping that this was the cause of her weight loss, I dewormed Frankie and set about trying to fatten her up.  She put on a pound or so, as a result of these efforts, and I allowed myself to relax again.

At the end of January, 2011, Frankie became very ill.  I found that she’d quickly lost even more weight and was down to just over six pounds – terribly thin for a cat of her size.  She passed away from intestinal lymphoma, a type of cancer, five days after she had become sick.  If there had been any way to save her, anything I could have done to have more time with my girl, I would have done it, in a heartbeat.  Letting her go was the single hardest thing I have ever done.  Even though I was a practicing vet tech at the time, with years of experience and a wealth of information, resources, and veterinarians to fall back on, I questioned whether I was doing the right thing.  I felt so guilty and heartbroken that I couldn’t do more, and those feelings stayed with me for a long, long time.  It’s four years later, and when I think of her now, I don’t feel as much of the sadness that she’s not here – though that does remain, and I think of her every day.  Mostly, though, what I feel now is happiness and gratitude that I got to share my life with her for the nine and a half years she was with me.  Frankie was my heart cat.  I loved her then and I love her still, and I carry the love of her with me each day, keeping her close, always.